Not sure what platform to play Cyberpunk 2077 on? We can help with that.

Cyberpunk 2077 is arguably the biggest game of 2020. The hotly-anticipated game has been plastered all over screens from conception to release, and now that it's here, it's finally time to jump in and explore Night City.

We've been working to make sure you have all the knowledge you need to keep up with everything Cyberpunk 2077 has to offer, but figuring out the best experience for you starts with deciding on which platform to play on. It's available on a variety of systems. If you have access to multiple platforms, which one should you embark on this journey that might take dozens of hours?

We've got all the answers you need and more right here.

Which platform should you play Cyberpunk 2077 on?

Cyberpunk 2077 is currently available on the following platforms: Xbox Series X|S, Xbox One, PlayStation 5, PlayStation 4*, PC, and Stadia. Here's what you can expect from each platform as well as the overall winner in terms of which version is currently the best.

It's important to note that Cyberpunk 2077 is suffering from a litany of issues that are plaguing users on all platforms. It's in the unique position of being an extremely frustrating game on certain systems, so much to the point that developer and publisher CD Projekt RED have issued an apology and have begun offering refunds as reparations for the game's glitches, abysmal performance, and other snags.

With that in mind, though there is one platform that we can comfortably recommend above all others right now, none are safe from game-breaking bugs, frustrating pop-ins, texture issues, crashes, save file problems, and other random problems. There are various patches in place and others rolling out right now that CD Projekt RED hopes will help to rectify the situation, but at this point it's too early to make a call on what's been resolved.

Cyberpunk 2077, when not plagued by bugs, glitches, missing NPCs, and other problems that some console versions share, works great on PC. It loads quickly, has excellent graphics, and feels the most complete for PC players. It seems to be the most immediately playable in terms of coming back from bugs when they do happen, too. It's crisp, runs smoothly, and can typically hold a consistently high frame rate.

There's a caveat to all this, though. You should be running a decently high-performance rig if you want to get the most out of the game. Plus, when patches are pushed through, they tend to tighten the PC version a bit more than the console versions.

Though Stadia is often looked upon as a bit unreliable as a game streaming service, it's improved significantly over the past few months. Surprisingly enough, it's busted out from Cyberpunk 2077's debut as one of the better, more efficient ways to play the game. This makes sense, of course, since Stadia is essentially streaming PC versions of games from Google's own cabal of systems.

Cyberpunk 2077 is available to play on next-gen consoles like the new Xbox Series X, Xbox Series S, and PlayStation 5 systems. The game's next-gen versions aren't technically available just yet, but it will run on the newer consoles nicely. If you're planning on playing on a console, choosing the Series X|S or PS5 is a good idea for several reasons.

You can utilize both systems' upgraded graphical abilities, comfortable controllers, and the convenience of not having to worry whether or not the game will actually run, as you would on PC. Reports indicate that the game looks great on both systems, though performance is hit or miss. This has been the case across all platforms since the game debuted. There are also lengthier loading times than what you'd expect from newer consoles.

Cyberpunk 2077 runs in an acceptable manner on new consoles, but you'll want to take caution if you want to go any earlier than current-gen systems.

Xbox One and PlayStation 4

Given that Cyberpunk 2077 runs fine on newer consoles, albeit with bugs and other frustrating issues, you'd think that the older versions on Xbox One and PlayStation 4 would work just as well. Unfortunately, that couldn't be further from the truth. The earlier versions of Cyberpunk 2077 on both consoles are frustrating, bug-ridden messes with major performance hits and other problems. The game is sluggish to the point of being unplayable for many, with frame drops, muddy textures, pop-in, save file corruption, and just about any kind of issue you could think of.

*These versions are the main reason CD Projekt RED has been offering refunds for users on both platforms, with Sony going so far as to remove Cyberpunk 2077 from the PlayStation Store until further notice. Microsoft has not followed suit, but is offeriing refunds just the same, no questions asked. Best Buy as a retailer is doing the same thing. Older consoles seem to have gotten the shortest end of the stick when it comes to Cyberpunk, and it's better off being skipped than trying to slog through on older systems at present.

If you absolutely must play Cyberpunk 2077 and don't own a newer console, we recommend opting for the Stadia version instead.

If you've got a competent rig, opt for the PC version. 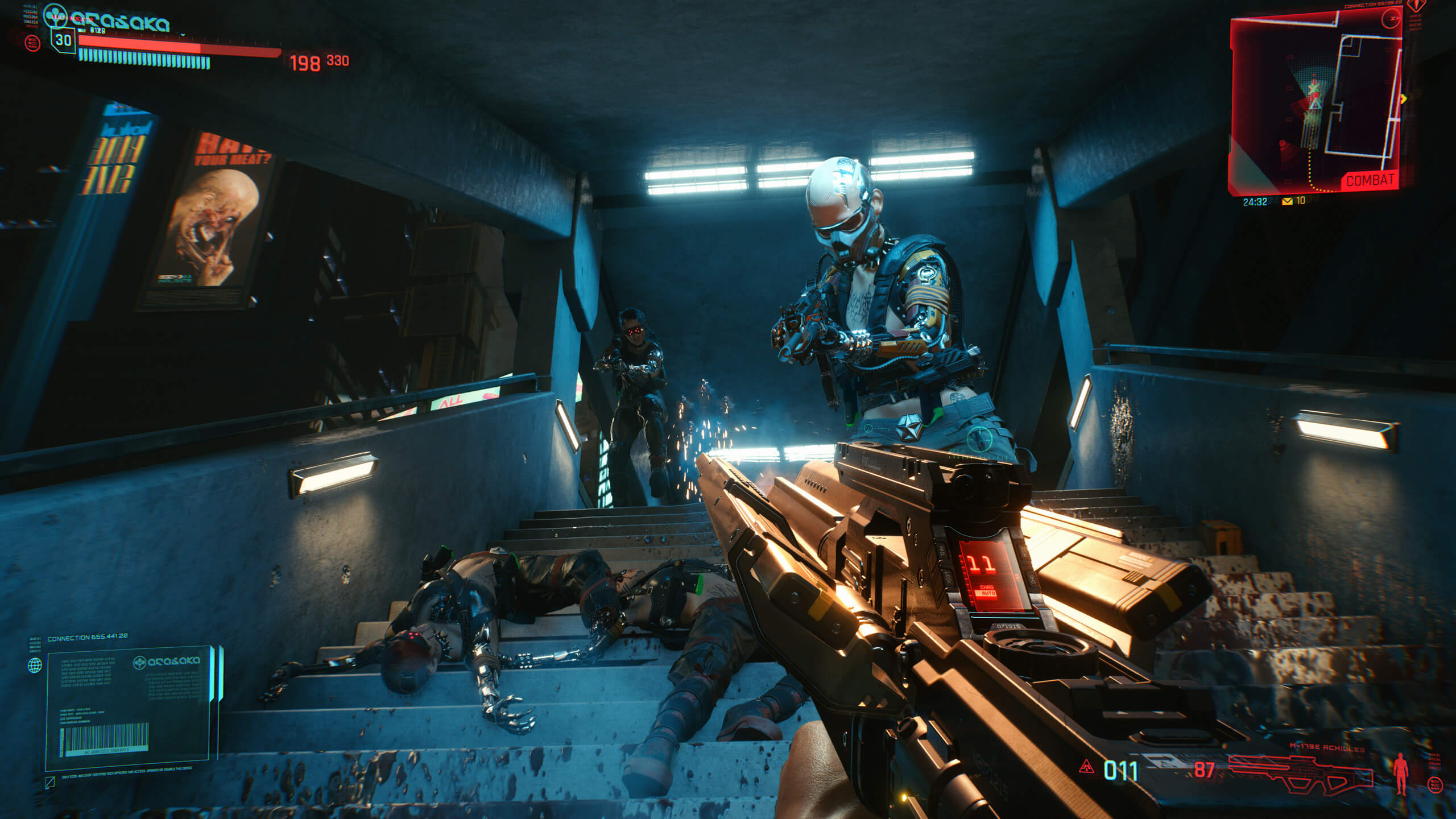 Though it's still frustratingly filled with bugs and other problems that willl undoubtedly frustrate you throughout the game, you'll have the most even and reliable experience here, or at least as much as you can get. That's not a promise of quality by any means, but after spending 60+ hours with the game on PC in comparison to console versions, the PC version is at least functional.

The Stadia version is a close second, especially if you're interested in streaming the game on your favorite device. Both are viable choices, but if you don't mind waiting a while for bugs to be squashed, you might opt to do that instead.

Ready to chat about all things Cyberpunk 2077? Join the official SteelSeries Discord server for plenty of talk about Night City.