You'll need to use all your paper prowess to beat the final boss of Paper Mario: The Origami King. Keep your wits about you (and this guide handy) and you'll get through it in no time.

The end of the game is finally nigh. After you finally make your push through what felt like thousands of origami soldiers, it's time to face off against Paper Mario: The Origami King's final boss. It's been a wild ride up to this point, but this is where everything comes together.

Facing off against the final boss of Paper Mario: The Origami King is nothing short of a challenge, but that's where we come in. We've got everything you need to know about defeating Olly in his toughest moment yet, which will be a difficult challenge no matter how good you think you are at the game.

The best advice we can give you before starting the battle is to go to the bathroom and have lots of snacks and drinks ready. You're going to be in it for the long haul. Now, without further ado, here's how you beat the final boss of Paper Mario: The Origami King.

How to beat Paper Mario: The Origami King's final boss 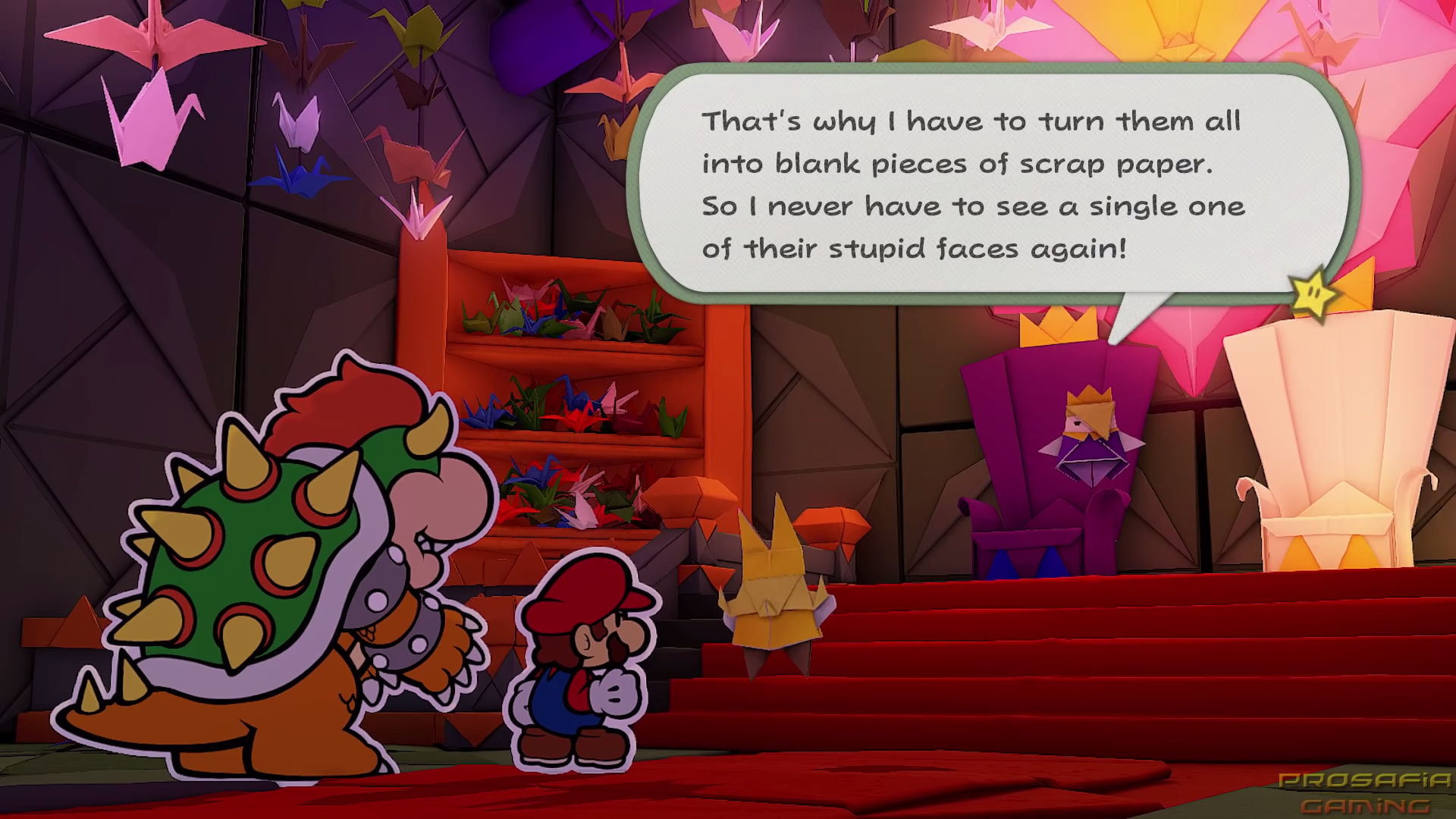 Yes, this battle is divided into several phases. Surprise! That's why we warned you that it's going to take a while. This is your final warning to come back and get ready for the boss fight when you've got more time. Ready now? Okay, let's do it! 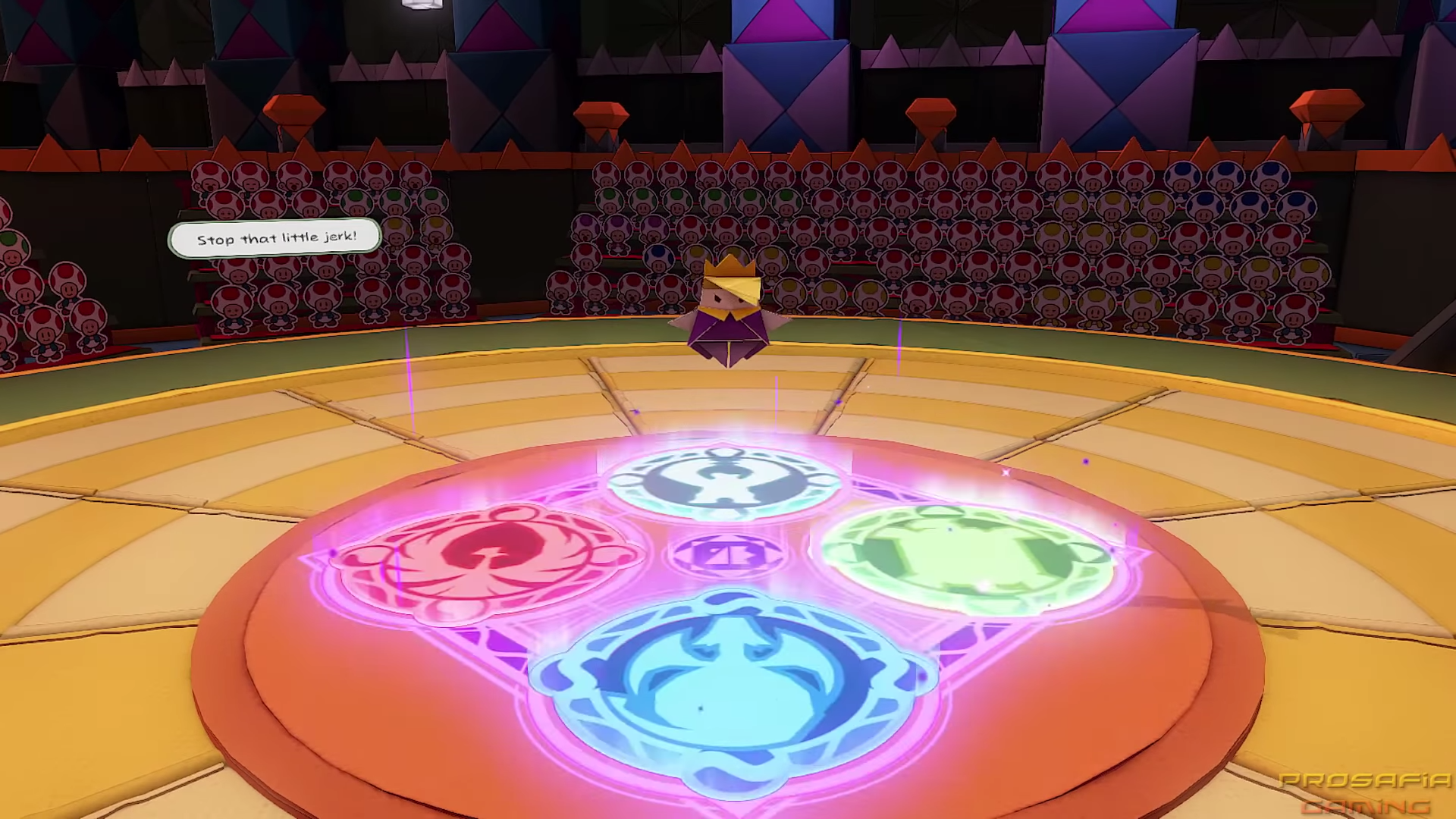 After giving us a typical villainous monologue, King Olly jumps straight into battle. He will take one of several elemental forms throughout this fight, including Water, Fire, Earth, and Ice Vellumentals. You can't use regular melee attacks against any of them, so instead you've got to watch the board for Magic Circles to attack him with. That's why this first phase is the longest part of the fight and the most frustrating, if you don't know what you're doing.

There are different steps whether Olly has assumed an Earth, Fire, Ice, or Water Vellumental form. If he goes with Earth, you're on Easy Street. Just try to activate the "On" panel and use the Vellumental Magic Circle with a diamond emblazoned on it. This way, you can choose which Vellumental your battle partner Olivia will use against Olly. Choose Ice to counter Earth and watch him freeze. Follow up with a 1.000 Folded Arms attack to start draining his HP. 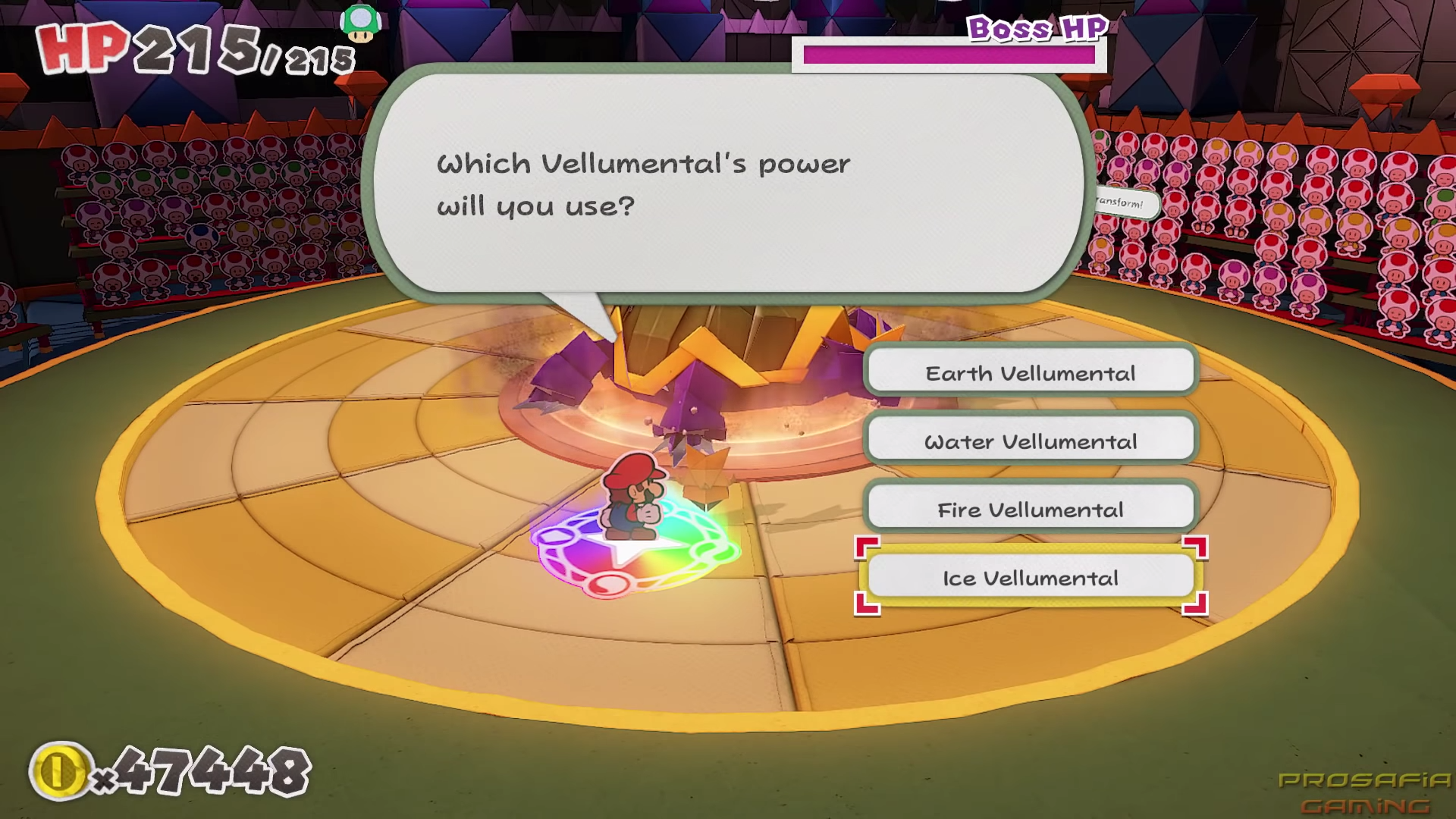 If you should have to deal with the Fire Vellumental, be careful to avoid the feathers Olly starts dropping on you. You'll get burned if they hit you, but that's something you can come back from. Just keep moving to the "ON" tile so you can change to a different form of Vellumental. Choose the Water Vellumental to launch an attack and then use 1.000 Folded Arms special move to bring home some additional damage. 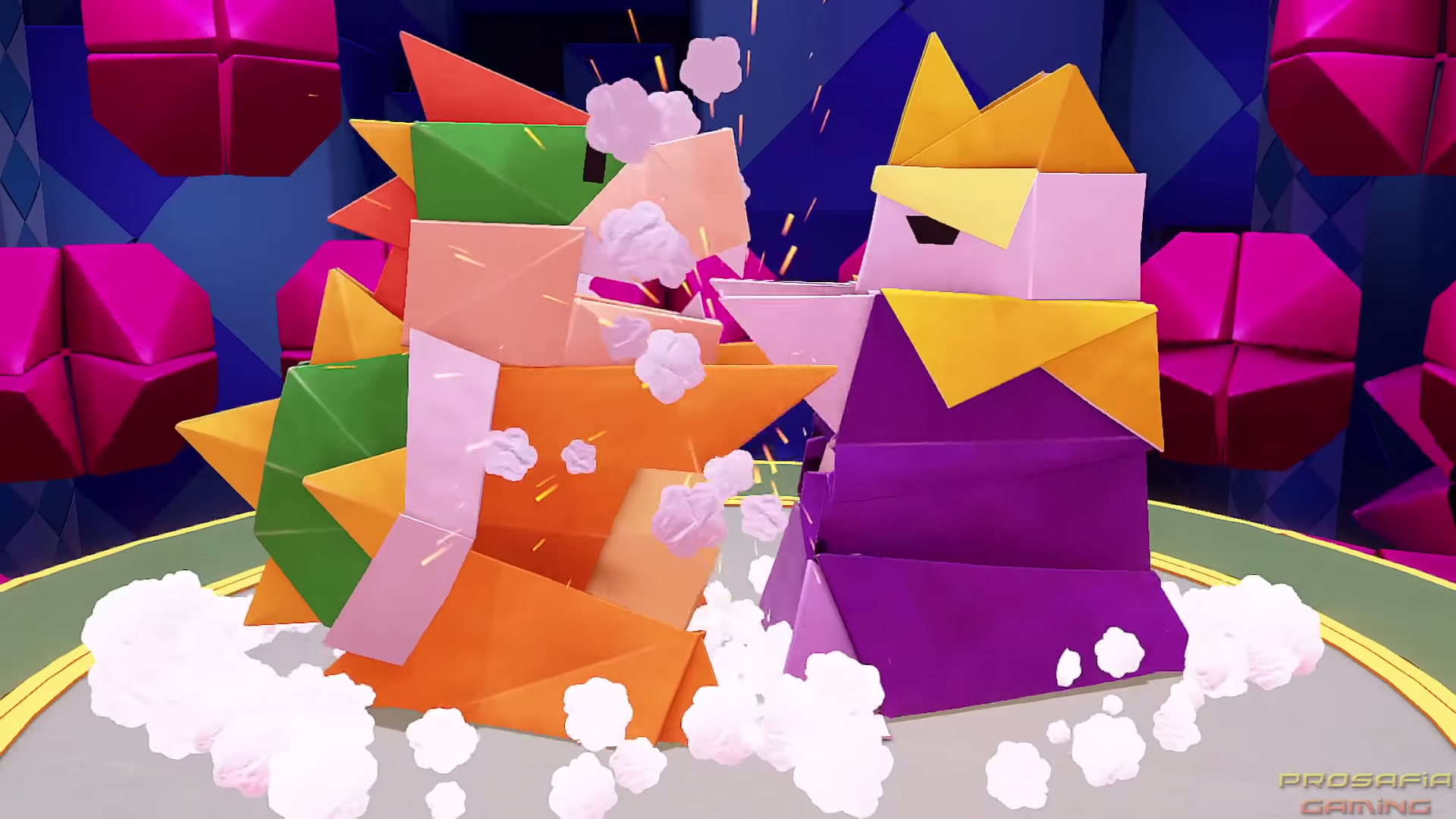 Once Olly gets all of those elemental changes out of his system, you've got another phase to contend with. This one is far easier than the previous one, as Bowser does a lot of the work.

Bowser will enter a match with Olly in his origami form. While the two are duking it out in the middle of the ring, you will run around behind them to use Magic Circles. Olivia coaches you to use the circles to attack directly behind Bowser to give him some support. 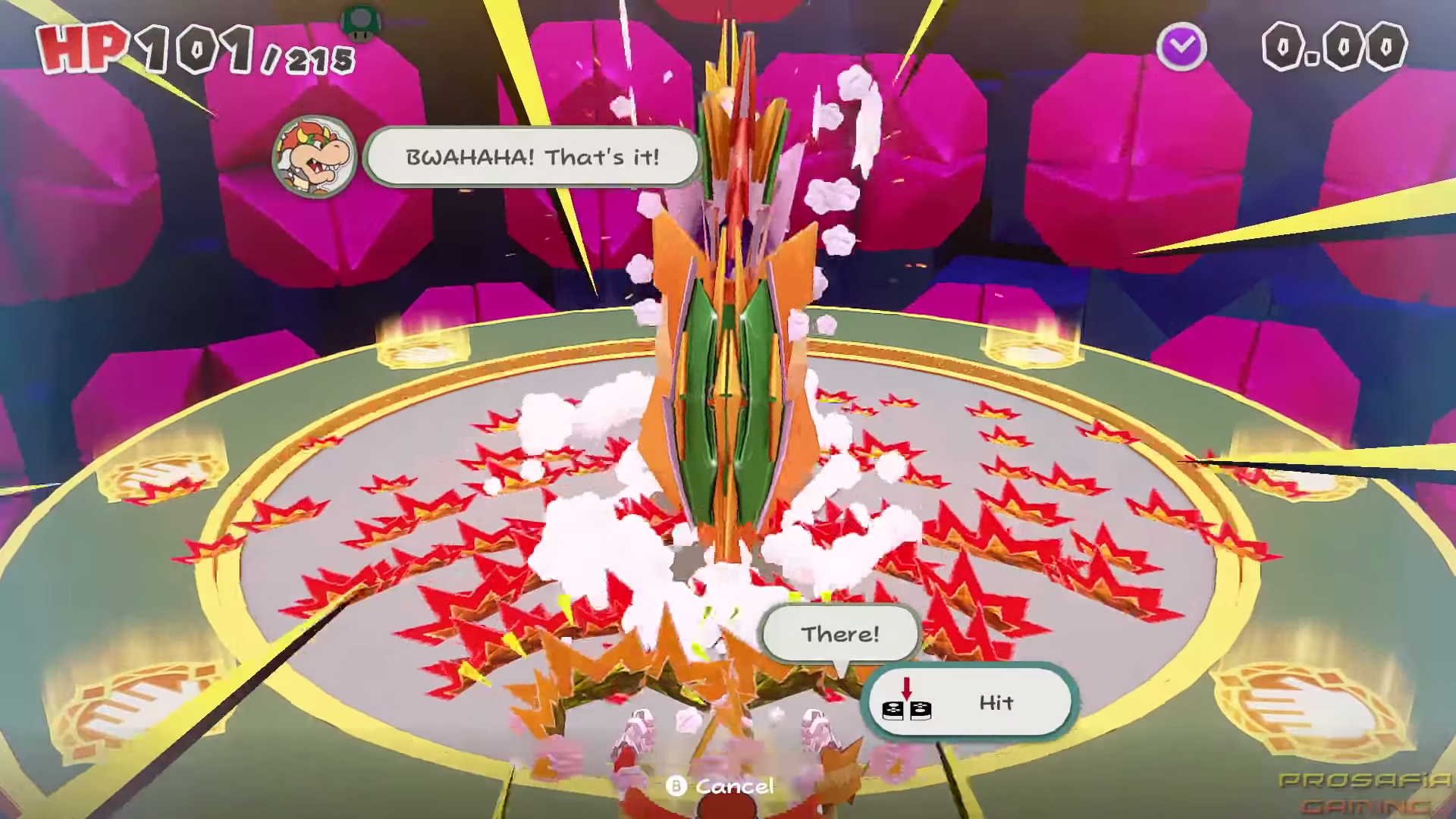 Avoid the shurikens flying toward you by jumping over them and keep hitting those circles to help Bowser. When you've done enough damage, be on the lookout for an Origami Thwomp to come in and close things out.

Use the Magic Circle to keep hitting the ground so Thwomp falls to its death. Eventually, Bowser will shove Olly away and you will move on to the next round. 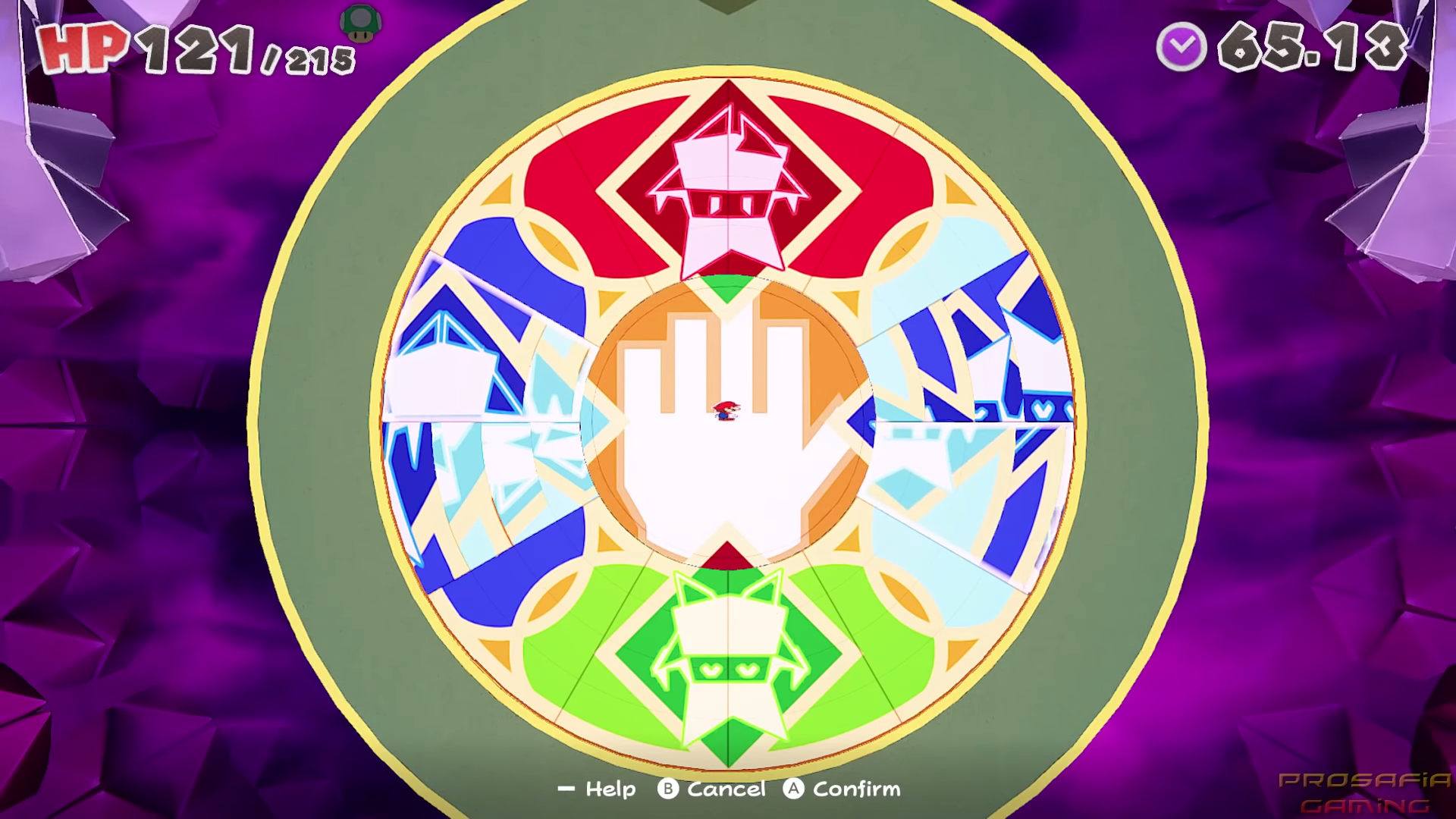 After Olly has been thoroughly trounced by way of Mario's elemental attacks and Bowser's beatdown, there's a third phase. Olly will scramble a puzzle in the main combat ring. Rearrange the picture until you can see Olivia in the center, all the while avoiding Olly's quick time event attacks. You'll need to press "A" to avoid these. 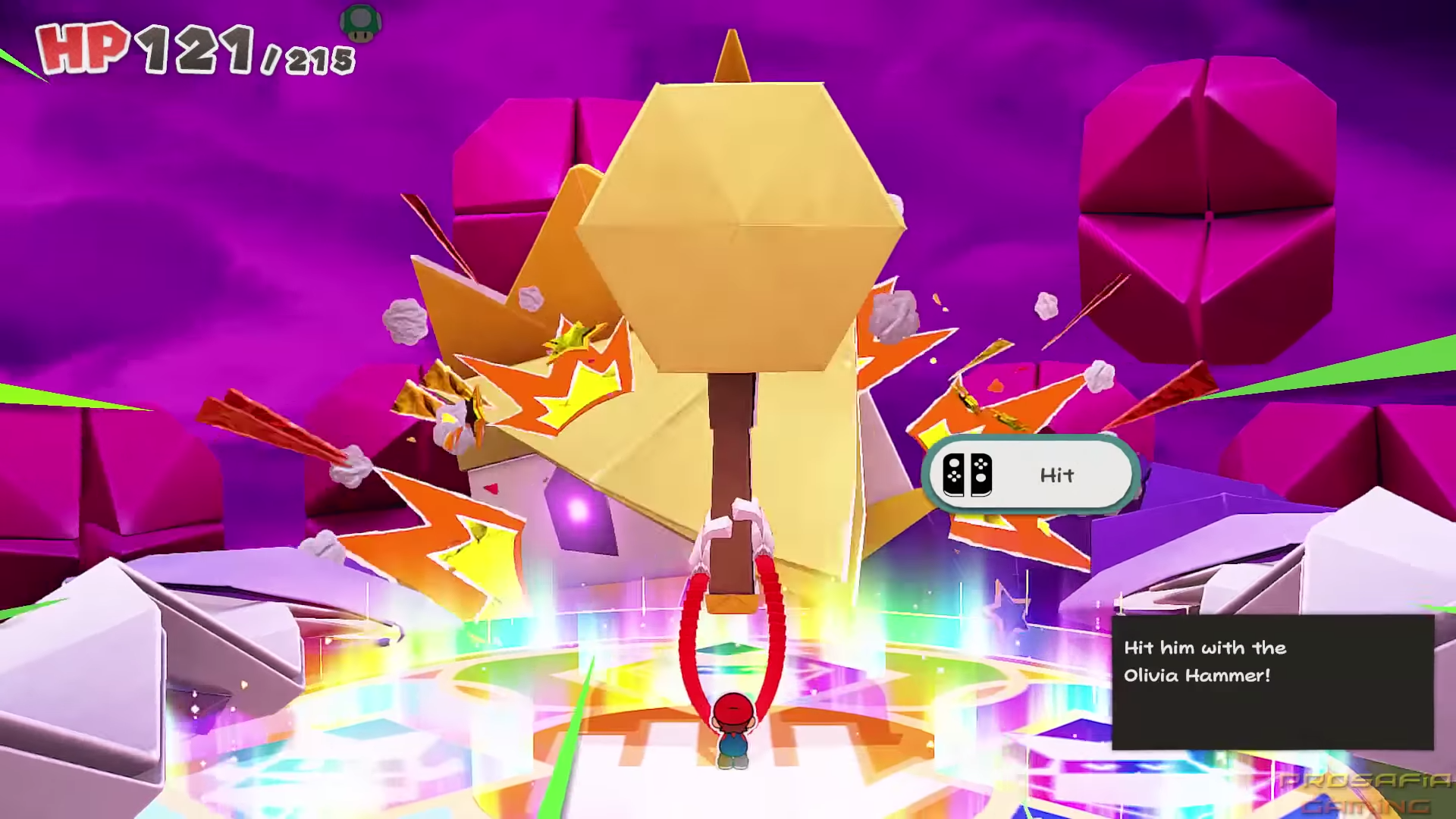 Finally, when the puzzle is complete, Olivia will step in and change into a hammer. Swing the hammer with Mario's crinkly arms, and you'll smash Olly into next week. This boss battle is officially over!

Now, all you have to do is sit back and let the ending play out. Congratulations! You've beaten Paper Mario: The Origami King!

Ready to discuss this battle with lots of other Mario fans? Join our SteelSeries Discord to see what others are saying. 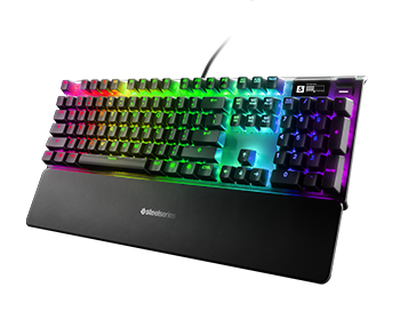